The Hit List will be published in ebook six months early!

I’ve been sitting on my hands and trying to keep this secret ever since I found out… My fourth book, THE HIT LIST, will be published in ebook on 28 August, 2020 and followed in paperback on 15 April 2021. 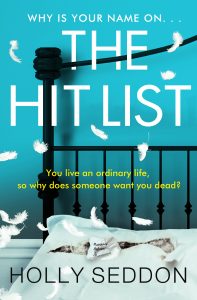 It’s available to pre-order now and you can add it as ‘Want to Read’ on Goodreads too.

‘A compelling and original story with clever and unexpected twists to the very end.’ Rachel Abbott

What would you do if you found your name on a hitlist? And your late husband put it there?

When Marianne’s husband Greg is knocked off his bike and killed on the way to work, she must unpick the life he left behind. Numb with grief, Marianne consoles herself by scouring Greg’s laptop, finding comfort in reading his old emails and tracing his footsteps across the web. Until one day, she discovers that he had been accessing the dark web. Why was Greg, a principled charity worker and dedicated husband, logging on to a website that showcases the worst of humanity’s cruel impulses and where anything is available for a price? Marianne steels herself and logs on. After tentative searching, she discovers her name on a hit list.

In this fast-paced, powerful and exceptionally plotted novel, Marianne must figure out whether Greg was trying to protect her or whether he was complicit in the conspiracy for her murder. As she is pulled deeper into the depths of the underworld that Greg was seemingly hostage to, she gets closer and closer to coming face to face with Sam – the assassin hired to kill her. The dark truths that Marianne uncovers speak volumes about the dark underbelly of our society and forces us to question how far we would go to protect those we care most about.

Win a signed copy of Love Will Tear Us Apart

The best crime and drama podcasts… according to me