TRY NOT TO BREATHE 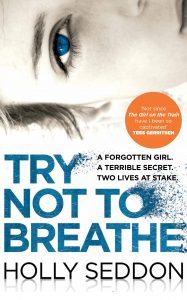 Try Not to Breathe was first published in January 2016 by Corvus Books in the UK and has since been published around the world. It’s been a bestseller in the UK, Ireland, Germany and Australia.

Buy Try Not to Breathe on Amazon.

You won’t be able to put it down.
Just remember to breathe.

Alex is sinking. Slowly but surely, she’s cut herself off from everything but her one true love – drink. Until she’s forced to write a piece about a coma ward, where she meets Amy.

Amy is lost. When she was fifteen, she was attacked and left for dead in a park. Her attacker was never found. Since then, she has drifted in a lonely, timeless place. She’s as good as dead, but not even her doctors are sure how much she understands.

Alex and Amy grew up in the same suburbs, played the same music, flirted with the same boys. And as Alex begins to investigate the attack, she opens the door to the same danger that has left Amy in a coma…