About Don’t Close Your Eyes 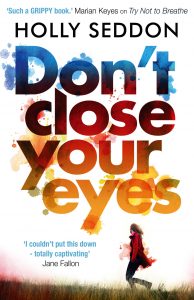 My second suspense novel Don’t Close Your Eyes was first published in the UK by Corvus on 6 July 2017.,

I’m too bashful to do this properly, so I’m going to quote my brilliant editor Sara O’Keeffe instead:

“Don’t Close Your Eyes is a grippingly tense, page-turning read with a plot that will leave you reeling and a cast of characters so richly imagined, you won’t be able to look away for a moment. I can’t remember the last time I read a thriller so affecting and impactful.”

Don’t Close Your Eyes tells the story of twins Robin and Sarah who were torn apart in their youth. Now in her early 30s, Robin lives alone in Manchester. Too scared to leave the house, she spends her days pacing the rooms or watching. Watching the street, the houses, the neighbours. Until one day, she sees something she shouldn’t…

And Sarah? Sarah got everything she always wanted, only to be accused of the most terrible thing. She can’t be around her new family until she has come to terms with something that happened a long time ago. And to do that, she needs to track down her twin sister.